Maryland is First State to Recognize Geothermal as Renewable Energy 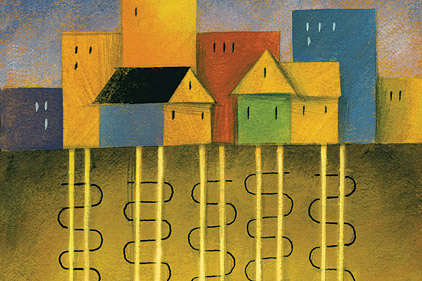 The Maryland legislature has passed a bill accepting geothermal heat pumps as eligible for state provided Renewable Energy Tax Credits. This sounds like a no-brainer, since the federal government has already waved the renewable tax credit wand over geothermal heat pumps with a 30% federal tax credit, but Maryland has finally become the first state to give geothermal heat pumps the same status as solar power. New York state provides a myriad of statewide incentives for the solar industry, but our legislature has not done the same for geothermal heat pumps. Currently, NYSERDA only provides geothermal heat pumps residential rebates for LEED certified homes. Commercially, NYSERDA offers a 10% tax credit for geothermal systems.  In contrast, solar photovoltaics receive up to $10,500 in rebates residentially and $75,000 commercially from the state, on top of LIPA utility rebates of up to $17,500 and $65,000 respectively.  LIPA offers a paltry $1000 per unit rebate on geothermal heat pumps via its Cool Homes program. Similar incentives are offered for Solar Thermal and Wind Energy.
Why state legislatures have not embraced geothermal heat pumps the way they have for Solar and Wind technologies is anyone’s guess, but much of this usually boils down to a lobbying effort. With Maryland making the first move, a precedent has been set and a door opened. Nationally, the Geothermal Exchange Organization (GEO) was formed to represent the interests of the geothermal industry. However, statewide and locally there are no chapters of GEO and no real associations in New York.  One of the first local geothermal associations is currently being formed as the Long Island Geothermal Association (LIGA) in an effort to obtain similar legislation in New York State and to promote geothermal while consolidating local codes and standards. LIGA will also become a resource for system design standards, technical training and installation guidelines for its membership. For those interested in additional information, contact John DeLillo, Jr.
As always, to keep up to date with what’s new in HVAC technology, visit our website at airideal.com and follow us on Twitter @airideal and at our Facebook page!